Photos by Jo Ann Spieth-Saylor. Evalina Pinnick, above, talks about the parable of the Good Samaritan during Church Anywhere at the YMCA of Harrison County. Below, she gets the children started on a craft project.

A retired school teacher has found a new place to share her love of Jesus with children after the coronavirus canceled her previous ministry.

Evalina Pinnick taught second grade in the North Harrison Community School Corp. for 32 years. A couple of years prior to the COVID-19 pandemic she began an after-school program called FCS (Fellowship Christian Students).

Earlier this month, Pinnick began offering Church Anywhere at the YMCA of Harrison County in Corydon. The non-denominational, faith-based program is for children ages 6 to 11.

Church Anywhere is a program from First Capital Christian Church in Corydon, where Pinnick attends.

“It is the idea of taking church outside the walls of traditional church buildings and taking it to the people instead of the people coming to us,” she said. “We have ‘micro sites’ that meet in people’s homes, rehab facilities and in jails and prisons across the state of Indiana. I wanted to do the same type thing with kids but couldn’t use the same curriculum, which is basically our weekly adult service, so I formed a program that was kid-friendly.”

The hour-long sessions at the Y, offered on Saturdays from 9:30 to 10:30 a.m., includes a message, songs, games, a craft and snack. This past Saturday’s Church Anywhere focused on the parable of the Good Samaritan and Matthew 7:12. 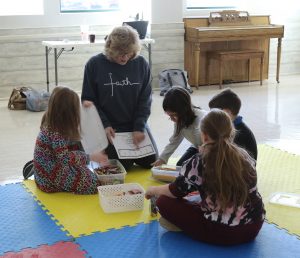 Pinnick described a parable to the youngsters as “an earthly story with a heavenly meaning.”

“We thought the program’s materials were great, and they align with the Y’s mission and values,” said Kimberly Spieth, CEO of the YMCA in Corydon. “Evalina has a heart of gold, and her passion to share the love of Jesus with the youth made for an easy decision to help offer the program.”

Since the free program began three weeks ago, registration has increased. However, Spieth said not every participant has shown up each week.

“I am passionate about teaching kids about Jesus,” Pinnick said. “I love to teach and knew early on that I wanted to be a teacher. Of all the subjects taught, my favorite is Jesus. I began working with kids in church when I was a teenager and never stopped.

“As a public school teacher, I was trying to come up with a way to host a Christian program in school but wasn’t sure how to go about it,” she said. “The idea of church anywhere seemed to give me the platform to launch from.”

Pinnick has since retired from teaching at North Harrison to watch her grandchildren. So, if the opportunity arose to again do FCS, she said she would not be able to do it as an after-school program.

“That is why I decided to approach the YMCA,” she said.

Church Anywhere is scheduled to run through March 19, which will be the Saturday prior to spring break for most local schools.

“We’re still learning what the best day and time may be that would work for scheduling, but we hope to continue it long after spring break,” Spieth said.