Charlie Conrad drives Ultimaroca to victory at Hoosier Park last Wednesday night, while LeWayne Miller guides Caption This, below, to the winner’s circle on Thursday. Photos by Dean Gillette

Taking a break from ISS racing halfway through the summer’s eight legs, both of these colts raced at Hoosier Park in Anderson last week and both recorded impressive wins.

Ultimaroca toyed with the field in his race last Wednesday night and came home by open lengths in 1:52:0. The 3-year-old son of Rockin Image was driven by his trainer and regular driver, Charlie Conrad. The racing experts prior to the evening’s card deemed the Conrad colt the “lock of the night,” meaning he was sure to win. He did. 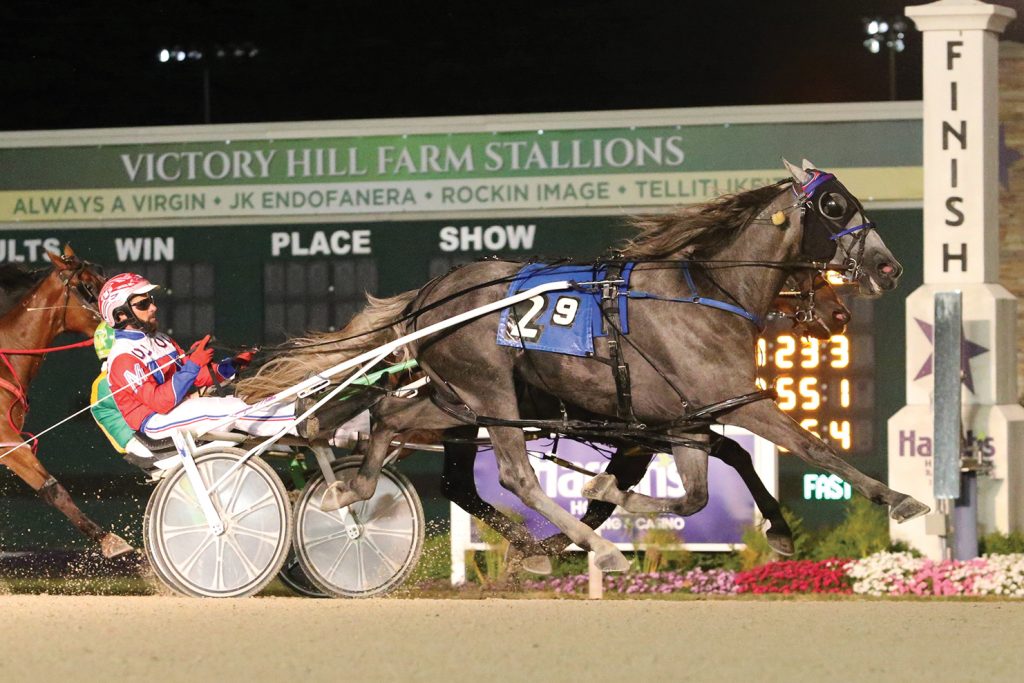 Caption This drew the toughest of three elimination races for a prestigious race to be contested on “Dan Patch” night, Friday, Aug. 13. Named after the sire of Dan Patch, Indiana’s most famous pacer at the turn of the century, the $25,000 “Joe Patchen” attracted enough entries to require three elimination races, with the top three finishers in each heat advancing to the final. The betting public on Thursday night made Caption This their favorite in his elimination race.

Leaving from post 2, Caption This settled into fourth position along the rail while the leaders fought it out to the half-mile pole. Following other horses until the head of the stretch, driver LeWayne Miller pulled the right line and Caption This responded by tracking down the rest of the field, winning in 1:51:0 with a last quarter in 26:4.

The Dan Patch Stakes will be raced for a purse in excess of $300,000 and will follow the Joe Patchen Series Final on the program Friday night. Hoosier Park’s signature stakes race for many years, the Dan Patch Stakes normally attracts the very best older race horses in North America and has twice within the past seven years resulted in a mile time faster than any previously recorded in the long history of pacers in the state of Indiana. It is carried live on WISH-TV in the Indianapolis area and on the cable racing channel TVG.

Other local racing last week included several horses at the Red Mile in Lexington Ky.
The Brock stable of Louisville picked up paychecks on Tuesday with Hey Hey Manhana, who finished fourth in her race, Gimme Sunshine third in his race and Winyard Hanover winning his race.

In the same race with Gimme Sunshine, Conrad’s pacer Bludhaven was second.

Conrad pacer Seaside Hill was third in his race that same day.

Rounding out the day on Tuesday for local interests, Hayswood Ron made his return to the races after a long layoff but could manage only an eighth-place finish. The 5-year-old bay gelding is owned by Hayswood Farm of Corydon.