E.K. (Duke) Roggenkamp is surrounded by his two sons and four of his six grandchildren on his 100th birthday, July 5. Submitted photos

Getting to have one’s favorite cake often goes hand in hand when celebrating a birthday.

That was certainly true for Edward K. (Duke) Roggenkamp Jr. on July 5. Joined by family members, the 100-year-old had chocolate cake with caramel icing.

“He had a really good day,” said Ramsey Vance of Milltown, one of Duke’s six grandchildren. “There were good visits, and he told some stories.” 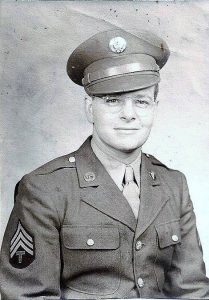 While normally more reserved, Vance said his grandfather is “more boisterous” when with family members.

“I was with him a lot while growing up,” Vance said. “He taught me so many things. … He’s been a constant sounding board. He set a very high standard of an example to live up to.”

The third child of E.K. Sr. and Florence Herdt Roggenkamp, Duke was born in Louisville on July 5, 1921. His father had a car dealership.

According to Vance, the business went under during the Great Depression. However, the elder Roggenkamp persevered and opened another one in Milltown about the time Duke was 9.

Duke graduated in 1940 from Milltown High School and was drafted into the Army.

“He served his country with distinction in World War II as a motor pool sergeant of the 424th medical collecting company, which was similar to a MASH unit but more mobile,” Vance said. “The company was attached to the 6th, 25th, 32nd, 37th and 1st Cavalry divisions. He made four amphibious landings, three in New Guinea and the main landing at Lingayen Gulf on Luzon, Philippines.

“After the surrender, he served as part of the occupation forces in Japan, finally returning home in 1946,” he said.

Vance said one of his grandfather’s proudest moments was when Gen. Douglas MacArthur asked all Masons in the Army to help re-open the Masonic Lodge in Manila.

“He had become a Freemason while stationed at Fort Knox at the age of 21, so he would have been one of the youngest to participate,” Vance said.

Duke is a 75-plus-year member of the Milltown Masonic Lodge.

On Feb. 6, 1943, Duke married Kathleen Hilgeman. Vance said the two were inseparable. Taking over the Roggenkamp dealership in Milltown from Duke’s father, they were one of just a few husband-and-wife General Motors service management teams in the nation.

Until the 1960s, the Roggenkamps also had a Massey Ferguson dealership in Milltown.

“They were both recognized widely for their philanthropic work for the Town of Milltown,” Vance said.

Duke has served as a deacon and elder at Milltown Christian Church, is a former assistant chief of the volunteer fire department, a member of the American Legion for more than 75 years and, in addition to being a Mason, is a member of the Order of the Eastern Star. (Kathleen was an OES member with her husband.)

The couple had four children, E.K. (Ed) Roggenkamp III, who resides in Versailles, Ky.; Kelly Roggenkamp, who makes his home in Georgetown; the late Rebecca Roggenkamp Vance; and Roslyn Roggenkamp, who died at the age of two days. There are six grandchildren and four great-grandchildren. A younger sibling of Duke’s still survives.

“He has encountered a lot in 100 years,” Vance said of his grandfather, adding he was able to “travel the world” while in the military.

During that experience, Duke contracted malaria, which led to some heart problems much later in his life.

A more recent highlight for Duke, a devoted NASCAR fan who rarely misses a race, was the opportunity to drive one of the famed cars for his 80th birthday, thanks to family who purchased a NASCAR experience package for him at the Kentucky Speedway track.

Vance said his grandfather reached close to 170 mph while making a few laps on the oval track.

Milltown was Duke’s home until a few years ago when he moved to Harrison Springs Health Campus in Corydon.

What about that nickname? After checking with his uncle, Vance said when his grandfather was about 4, he was working under a car with his father. They heard on the radio that the Duke of Windsor was in the United States visiting.

“He came out from under the car and said, ‘I’m the Duke’,” Vance said.

He’s been known as Duke ever since.