Boys’ State Track and Field Finals
Corydon Central senior Camden Marshall, left, glances over his shoulder at Columbus North’s Reese Kilbarger-Stumph and with about 25 meters to go in the 1,600-meter run, going on to win the event in 4:07.31. Photos by Wade Bell

Corydon Central distance runner Camden Marshall has always had a love for track and field. Marshall began running in his early teens and was getting attention his freshman and sophomore years in the spring. The senior had two of the best runners in the state to learn from as he worked to get to the upper levels of the sport. 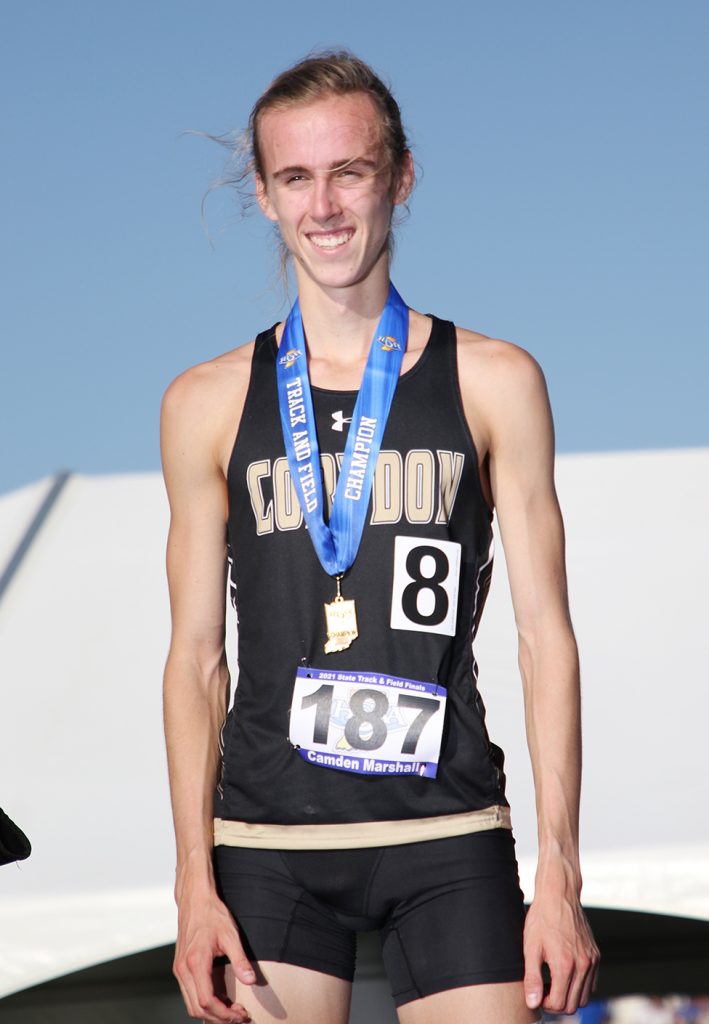 “I remember I would watch Caleb Futter and Skylar Stidham (from Christian Academy of Indiana) and, literally, I was like, ‘Those dudes are gods’,” Marshall said Friday afternoon at this year’s Indiana state track and field championships at Ben Davis High School. “They were literally just a god and another level. ‘I’ll never be able to do that’.”

When the pandemic hit last year and the 2020 season was canceled, Marshall kept running and training.

“It allowed me to catch up with some other guys,” said Marshall. “I got an uninterrupted six or seven months of training. I think that really did me well. At that point, I was just kind of building at 45 to 50 miles a week. This winter I was 60 to 65. Once the season started, I just kind of backed it down to 50 to 55. Then a couple of weeks ago, I backed it down to 5 to 10 miles a week just to freshen up a little bit.”

That extra training paid off this year in a big way. Marshall joined the ranks of Futter and Stidham Friday afternoon at the boys’ state track and field championships, winning the 1,600-meter run.

“I was just telling myself to cling on for three or 3-1/2 laps and just kick as hard as I could down the home stretch,” he said. “With about 250 left, I was hurting. I was hurting bad, but I kept my nose down and I said, ‘I can’t let them go.’ I just hung around there to where my leg loosened up and I could kick it home.”

Marshall still had a gear left, however, and opened it up in the final 100 meters. He passed Kilbarger-Stumpff and Guerra down the stretch and won by three steps, covering the distance in a blistering time of 4 minutes, 7.31 seconds.

“I was just going for it,” Marshall said. “I’ve seen way too many people let up at the line and get passed at the last second and I said, ‘I just have to finish it.’ That’s definitely the most I’ve hurt in a race for a long time.”

Marshall wasn’t the only one smiling after the race. Eleven seconds behind him was Floyd Central freshman Will Conway, who finished fifth in a time of 4:18.84.

“I didn’t see it coming,” said Conway. “I was towards the back but that was the plan. The middle of the race is not my funnest part, so that way it went about how I expected. My last lap I just surprised myself. I’m pretty sure it surprised a lot of other guys too, so I’m happy with it. I think I passed roughly eight people on the last lap.”

Marshall came back later to run the 3,200 but dropped out just past halfway.

“I spent most of the hour to an hour and a half throwing up, just lying down,” said Marshall, who will run for Indiana University next year. “I tried to get up, and I warmed up and did some strides and I was hoping to give it a run for at least a podium but it just didn’t happen.”

“I actually saw the (Indiana) coaches here, so that was pretty cool,” he said. “I’m ready to get training with a really good group of guys.”