Boys take third in their competition
Members and coaches on the Corydon Central Junior High School track and field teams gather for a group photo following the state meet in Terre Haute on May 22. The girls’ team finished first and the boys’ team was third. Submitted photo

Missing the entire 2020 season due to the COVID-19 pandemic may have added some fire and determination to the boys and girls Corydon Central Junior High School track and field team this year.

Both teams were 8-0 this season and claimed victory in the Mid-Southern Conference championships. The girls scored 141 points over second-place Austin (115.5 points), while the boys tallied 143 points and held off North Harrison (82). 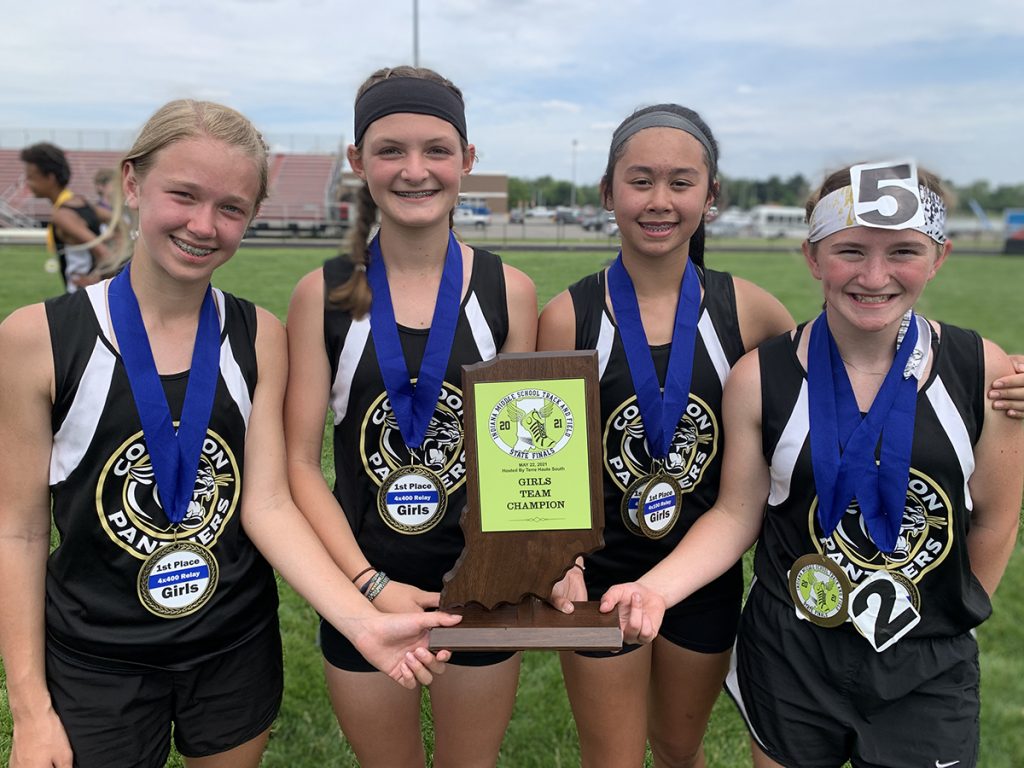 The Corydon Central track and field program has a unique structure for their teams and nine-member coaching staff, with the junior high and high school programs essentially sharing coaches.

Kegan Livers completed his first year as junior high head coach after several years as an assistant to
Brian and Marcee LaHue, who head up the coaching staff and oversee the programs.

“We wanted to create a program where we had the opportunity to coach kids from sixth grade to 12th grade and emphasize a culture of family and belonging,” said Brian LaHue, head coach for the boys’ high school team. “This year we placed a premium on building a fun and exciting team culture, one that we hoped kids would really want to be a part of.  Our vision of building a unified program across schools really started to take shape this season, and it was a pleasure to see it develop and grow.”

Kegan spoke some about this season.

“At our very first track meet, we didn’t really know what to expect since we hadn’t had a track meet in almost two years,” he said. “Within the first five minutes of the meet, Titus Wolfe popped off an 18-foot long jump, and that’s how our season began. … My absolute favorite memory of the season was my girls’ 4×100 team winning the state championship. Those girls did everything right all season. Aniston Applegate, Gracie Wate, Kyndall Mathes and Alyssa Murphy cared so much about that race. They weren’t seeded to win that race, but that didn’t matter. All four of those girls are wicked fast; they have great hand-offs … I’m so proud of those girls.” 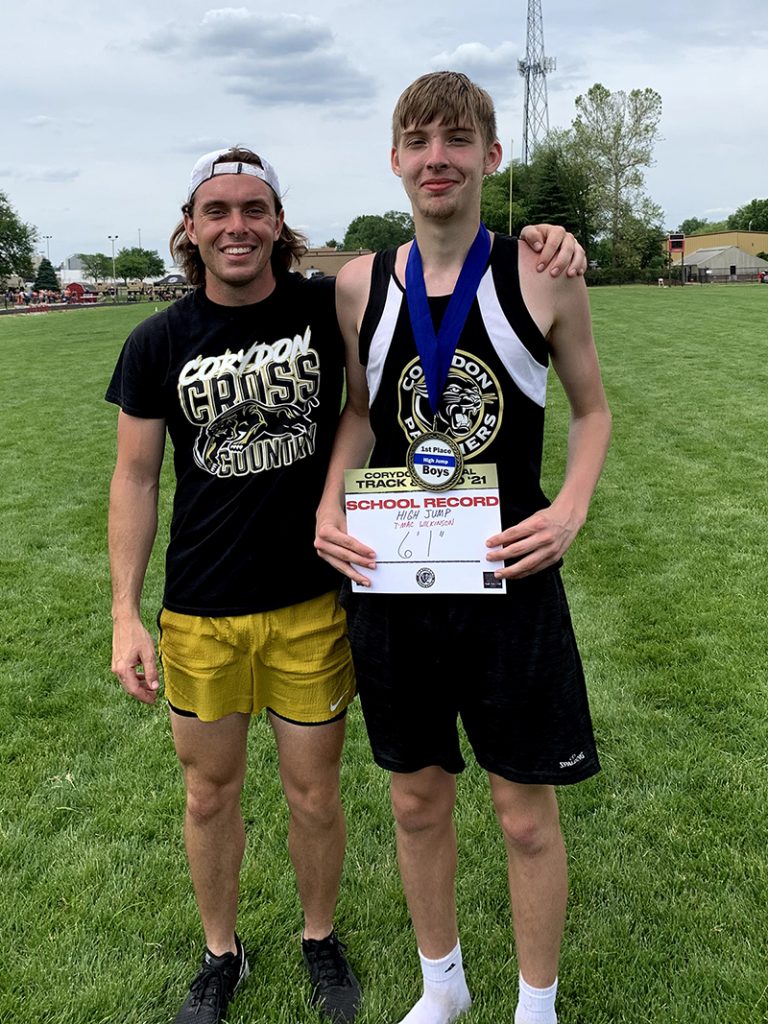 Marcee LaHue said she was “incredibly proud” of the endurance crew this season.

“We had a group of kids that were so committed to being their best from fifth graders to our seniors,” she said. “I love the fact that our younger athletes have some amazing role models in our high school athletes, and they are all super supportive and encouraging of one another. Our junior high endurance athletes definitely had some memorable moments this season. On the boys’ side, Booker LaHue broke the school record in the 1,600m (4:55.88) and 800m (2:08.43) and was the conference champ in both events. Chuck Rowan worked incredibly hard and did an amazing job winning county in the 1,600. Booker, Chuck and our sixth grader, Isaac Hamilton, all qualified for the state meet in multiple events and teamed up with Sam Haskins at state for the 4×800 relay (placed seventh). Our 4×400 team placed fourth at state and had two strong endurance guys, Kye Combs and Booker LaHue, paired with T-Mac Wilkinson and Titus Wolfe.”

The endurance girls “killed it” in the 800 and 1,600 with a solid pack of five to six Lady Panthers leading the field.

“We simply dominated,” Marcee LaHue said. “The pinnacle display was at state when Gabby Holland, Lilli Pavey, Mya Weick and Peri Leghart ran an incredible 4×800 relay race. One of the best chase-downs I’ve ever witnessed was Peri’s amazing anchor leg of that race beating the lead runner at the finish line by a stride, sealing the win as our first state champions of the day. Peri also anchored the incredible state champion 4×400 team along with Ani Applegate, Georgia LaHue and Livy Schreck that secured the points needed to become a state championship team.” 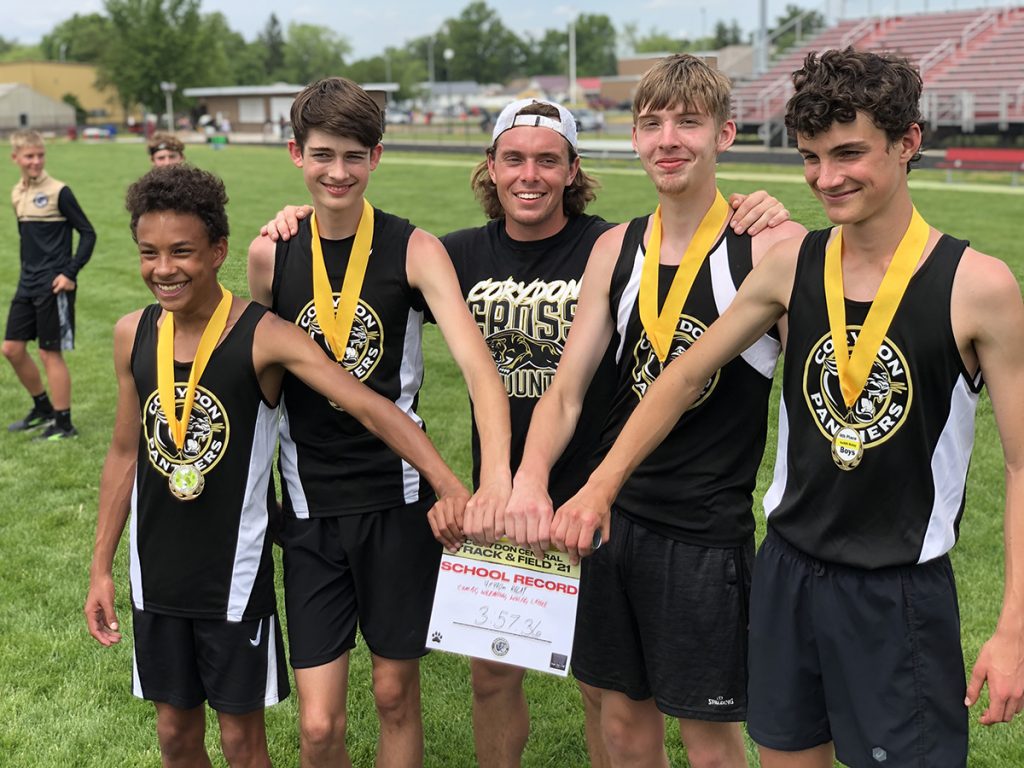 One surprise for the Kegan this year came during a meet with Salem.

“Our Salem meet was only T-Mac’s second time ever high jumping, and he jumped six feet,” he said. “We were all blown away and so proud of him. He went on to break the school record and win the state championship in high jump.”

He also sang the praises of the girls’ 4×400 team, which was seeded fifth going into the state meet.

“We were down eight points and needed 10 points to win the state championship,” Kegan said. “First place is 10 points and, when I explained the situation to them, they put their game faces on and went out and crushed it. They beat the previous PR by 10 seconds … When those girls put their minds to something, they cannot be stopped. And that’s the mentality that Brian, Marcee and myself ingrain into every practice.”

Brian LaHue recalled an event at an early-season home meet with Charlestown and Eastern (Pekin).

“Gabby Holland was trailing most of the 1,600m race by a large margin,” he said. “With about 200m to go, she kicked in the boosters and chased down the leader to win in dramatic fashion. I remember seeing all the fans begin to stand up as Gabby approached the finish line and all her teammates running to cheer her on. When she won, everyone went crazy and it was sort of a solidifying moment for our teams.”

He added that Brock Conrad had a “monster” season, performing great in the discus and shot put, grabbing second place at state in the shot and third in the discus. Also, Jordi McCarty, a newcomer to the team, broke the shot put record after only a couple meets.

“Finally, I have to mention what a joy and pleasure it’s been to coach my own children, Booker and Georgia,” Brian LaHue said. “I’ve gotten to experience so many proud dad moments this year, and I’m super excited for what the future holds for those two.”