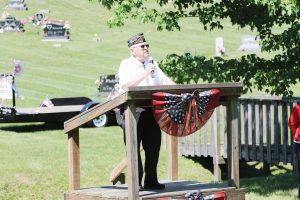 A group of motorcyclists are among the parade entries in Elizabeth on Memorial Day that preceded a service at Rose Hill Cemetery. Both events were canceled last year due to the COVID-19 pandemic. The Rev. Dick Goodwin, left, on behalf of American Legion Hornickel Post 379, led the service that honored the 109 Harrison County veterans who died in the past year and could not have a military service. “Our military final salute will be for them,” said Goodwin, adding that “we lost an average of one veteran in Harrison County every 3.6 days.” Goodwin reminded those in attendance to acknowledge the suffering the nation’s soldiers endured. “Many of our past military personnel, though heroes in their own right, still carry physical or emotional scars, and they will for the rest of their lives,” he said. “And as a result of military experiences, we lose an average of 22 veterans to suicide every day.” Goodwin said the qualities of heroism are self-sacrifice, courage, honor and duty above that of self well-being. Besides recognizing past and current military personnel, the program also recognized teachers, educators, law enforcement officers, firefighters, EMS and dispatchers. “Let’s never forget that our tomorrows were bought with a price,” Goodwin said. “Someone had to pay a tremendous price, with body, mind, emotions or even life itself. So, all that are free today, let us remember them; let us honor them; and let us show respect for each of them.” Photos by Jo Ann Spieth-Saylor