Be prepared for spring storm season

Severe weather alerts can be transmitted via weather radios and cell phones. Photo by Wade Bell

With many people sitting at home thinking about the various aspects of life as it pertains to the COVID-19 virus, it’s possible another threat has been forgotten: tornado season.

It came in March 1 and only took 36 hours to rear its ugly head. During the afternoon of March 2, tornado-warned storms moved into western Kentucky near Paducah. A couple of those cells carried their strength to the east, hitting several towns, including near Bowling Green, Ky.

The day turned into night and a storm just to the south of Bowling Green went tornadic at one of the worst possible times, while people were going to sleep. By the time it got to Putnam County, Tenn., and downtown Nashville, it had turned into a mile-wide wedge. The storm stayed on the ground for more than an hour and traveled 75 miles; 24 people died in that storm and more than 300 others were injured.

March was a busy month with dozens of tornadoes, including at least two in California, which rarely sees storms of this nature. Illinois, Indiana, Missouri, Texas, Kansas, Kentucky, Alabama, Mississippi and North Carolina have been hit this year.

Additional tornadoes have done extensive damage this month, too.

So, what does it take to make a tornado? There are a few necessary ingredients. The first is warm, moist air coming up from the Gulf of Mexico. The second is colder, drier air out of the Rocky Mountains. Where they meet is called “The Battlezone.”

Another ingredient is wind shear (winds moving in different directions at different altitudes).

Tornadoes fall into two different categories of storms. Smaller, shorter-lived tornadoes can form along a squall line as a strong cold front begins to pass through to the east. While not usually as strong as their big brothers and usually brief in nature, they can cause considerable damage.

Their big brothers are super-cell tornadoes. These are the ones storm chasers dream about and are also the most dangerous. These cells are usually loners out ahead of a strong cold front that develop a strong updraft that begins to spin. The updraft spins into a mesoscyclone, a wall cloud forms next, then a column of air follows down to the ground to lift debris, officially making it a tornado.

Early warning is the key to surviving a tornado; there are several ways to get that warning.

The National Weather Service transmits warnings to both media outlets and by their own weather radio frequencies. Weather radios can be purchased at most department stores in the electronic section and come in both table models or mobile sizes small enough to put in your pocket or purse. Most cell phones also have apps to pick up warnings.

A tornado watch means conditions are ripe for tornadoes and people should be on alert in the event warnings are later issued. A tornado warning means a tornado has been seen on weather radar or sighted and those in the area need to take cover.

If in a house with a basement, go there immediately to a small area with no windows and lay down close to the floor. If the building you are in has no basement, get into the smallest room near the center of the house on the lowest floor with no windows, preferably a bathroom or closet, and lay low on the floor or get in the bathtub.

If you live in a mobile home, have a plan ahead of time of somewhere you can go where the building is much stronger. More lives are lost in mobile homes to tornadoes than any other structure.

If you are on the road and see a tornado, stop and get in a ditch if you can. If you see it far enough ahead and the storm is moving perpendicular to you, you might be able to just stop and let it pass. Do not get under an overpass or bridge; the overpass or bridge will act as a wind tunnel, increasing the wind speed and creating a more dangerous situation.

Not all storms produce tornadoes; many also produce damaging straight winds or large hail. Straight-line winds of 100 mph can cause as much damage as a tornado and kill as well.

In 1995, a storm with 100 mph straight-line winds traveled through five states killing five and injuring 11 on one site alone at a group campsite in New York state. Hail has been known to reach the size of grapefruit. 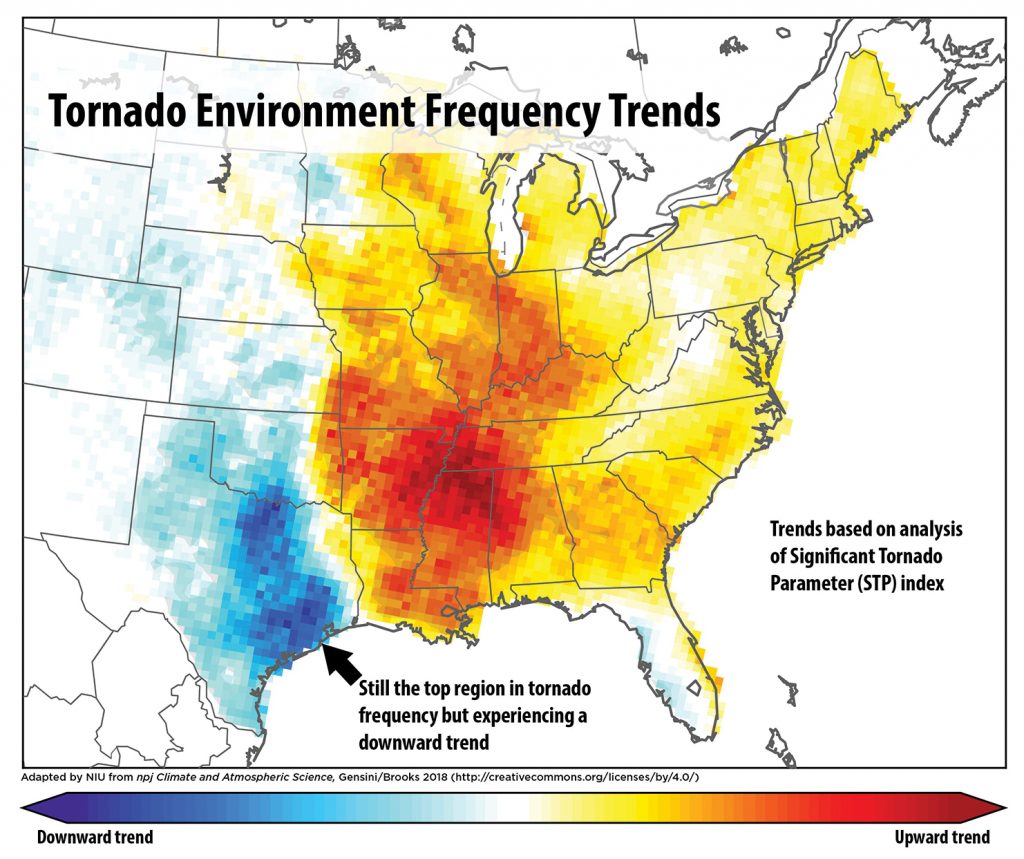 Tornadoes can happen at almost any place in the world at any time. The spring season is the most active time, but tornadoes have happened during all parts of the year, including the winter months.

The spring season of March through June are the most active months in the United States for tornadoes with 1,210 in 2019 during that time period. May was the leading month with 556 tornadoes nationwide. Last year, in Tornado Alley in the Great Plains, Texas claimed the most tornadoes with 188 while Kansas had 127 and Oklahoma 99.

Besides Mississippi, other states included in Dixie Alley are Alabama, Tennessee, Kentucky, Georgia, Florida and both Carolinas. In 2018, Indiana and Illinois were added to Dixie Alley due to the increased number of tornadoes in those states.

There’s another danger to remember, and it kills more people than all of other hazards combined: flash flooding. Flash flooding can happen when the ground becomes saturated from snow melt and previous soaking rains. Any large rainfall event can lead to creeks, rivers and other low areas to suddenly overflow with little or no warning. Six inches of fast-moving water can knock a person off their feet. One foot of fast-moving water can move a vehicle, while as little as two feet can move a vehicle as big as a school bus.

When driving, if you can’t see the road due to water, do not drive into it. It’s possible that part of the road has been washed away. On Dec. 7, a family of nine in Tonto, Ariz., was washed away in their station wagon. Remember: Turn around; don’t drown.

In all of these hazardous weather situations, being warned early and having a plan of action is necessary. Practice that plan so you know exactly what to do. Put together an emergency kit and go-bag you can easily reach if you are forced to change locations. Have more than one way of getting that warning, having both a weather radio as well as your phone. Make sure your phones or other electronic devices are fully charged ahead of that hazardous weather day.

There’s still a lot of severe weather season left for this year. Get yourself prepared now so you’re not sorry later.