Opening a business at any time can present challenges. But, imagine starting one that calls for customers to patronize your establishment and within days the public is told stay home to allow for the slowing of a deadly virus.

That’s what happened to Andrew Ferree and Jill Torbet when they opened The Farmhouse Kitchen, located at 450 Quarry Road north of Corydon, on March 2.

“We were not expecting this to happen,” Ferree said, referring to the coronavirus outbreak that has since been declared a pandemic. 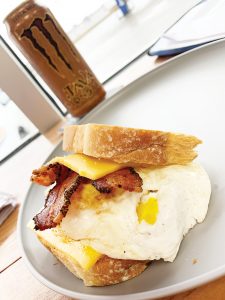 Restaurants and bars were told they could only operate for the foreseeable future by offering carry-out and drive-thru orders.

“We’re grateful our customers can walk up to our window,” Torbet said.

The location for Farmhouse Kitchen, which is on the same property as the Marathon gas station, was familiar to Ferree; it’s where his dad usually purchases fuel for his logging business. Many of their customers work in the Harrison County Business Park.

Torbet said they have numerous truck drivers who say they have no place else locally to buy meals and will often also purchase a cold sandwich to eat later.

Ferree, using the business name Oink Snacks, began dabbling in the food industry about eight years ago when he made and sold pork rinds (he promised he hasn’t quit selling rinds). He expanded to include doughnuts and later ribeye sandwiches.

His previous employment was working as a conductor for a railroad company. He still runs his father’s logging business, now in its third generation.

Harrison County is where Ferree’s roots are. He attended kindergarten at Lanesville then went to St. Mary’s Catholic School for two years. For grades 3 to 8, he went to New Middletown. He graduated from Corydon Central in 1998.

Torbet, who is from Chicago, relocated to the Louisville area about 13 years ago. The two met on social media, and now Torbet, and her 17-year-old son, Jacob, also reside in Harrison County.

“With the businesses here, they typically work Monday through Friday anyway,” Ferree said.

Torbet said they’ve kept those same hours during this time of carry-out orders only.

“We buy all of our meat locally from Sanders Meat Processing,” Ferree said. “The deli meat is from Sanders as well.”

The sausage used at The Farmhouse Kitchen is a sage blend Sanders makes special for it.

“And our produce comes from Steve (Ehalt) of Lanesville,” Torbet added.

Items, such as croissants and biscuits and gravy, are made from scratch daily.

Prices fluctuate to reflect what the business pays for products.

“Since we’re getting farm to table, we want to do that,” Torbet said.

Using their BLT as example, Torbet said they want to make sure every bite is complete with the product.

Homemade soups are available every couple of days.

Plans are to eventually add hamburgers and rib-eyes.

“Some items we may do away with, depending on what customers want,” Ferree said.

Sweets, such as pie, cake and Rice Krispie treats, will be available following the COVID-19 pandemic. Until then, there are fresh-made doughnuts and cookies. Individual-size bags of chips are sold, too.

Once eateries are allowed to have dine-in customers, those visiting The Farmhouse Kitchen will find tables, chairs and décor resembling, well, a farmhouse kitchen.

Earlier this week, Ferree and Torbet treated emergency room and EMS staff at Harrison County Hospital in Corydon with sandwiches.