Pass the pen: A thank you Thank you. I should probably end this there.

How grateful I have been for the opportunity to be the transporter of information and photos from the student-athletes in and around Harrison County to you the reader. I can’t put into words, but I’m going to try.

As some may have heard, after 12-1/2 years as The Corydon Democrat sports editor, it’s time for me to graduate and move on to something new. I took a spelling test (failed) and current events test (I couldn’t name all the government officials in Indiana back in 2007, I wear Louisville Cardinals gear for goodness sakes), but previous editor Jackie Carpenter took a chance on me and I’m forever appreciative.

Now, as I fight through writing this, there is no doubt I fell for this community. I went from big city (Louisville) to a small college (Lindsey Wilson College) and, from there, became enamored with small-town journalism. There is a great sense of pride with communities like Corydon, Elizabeth, Lanesville, Ramsey and so on with their newspaper.

Keeping the sports pages each week balanced and vibrant was my goal. My dream was to be a sports reporter since I read The Courier-Journal, The Sporting News, Sports Illustrated and every college basketball preview magazine I could get my hands on as a kid. I once had lofty goals to write or photograph for those publications, but I found my niche and did my best to ensure the weekly editions of The Corydon Democrat had the photos and content of the big dogs.

YouTube search “Corydon Democrat” and see old videos of Ross Schulz and I breaking down basketball sectionals and see why I chose print journalism over broadcast.

Ordinarily this column would be about thank yous (and certainly not about myself, unless the Cubs won the World Series again) and there are plenty to go around. Thank you to all the athletic directors, coaches and athletes for everything from access to hospitality. Thank you to O’Bannon Publishing Co. 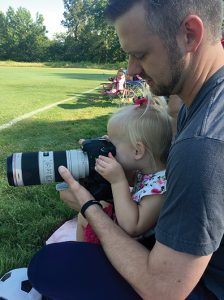 Inc. for this chance. There is a reason there have been three sports editors in the last 30-plus years. Kudos to current and former sports writers Wade Bell, Chris Timberlake and Alan Stewart along with editor Jo Ann Spieth-Saylor for all the knowledge and assistance. Also to Bryan Moss as well, who makes photography an art. The biggest thank you goes to my understanding wife, Sara, and our two smart, energetic and active kids, Jonas and Eleanor. If these sports pages have been my world, they are my universe. I can’t wait to spend more time with them.

Under the hood, I’ve had the pleasure of covering 53 — 53! — sectional championship teams and countless individual sectional champs. Fist-bumps to you, South Central baseball and girls’ basketball; you’ve been part of the most with six apiece. Yes, Lanesville baseball, you check-marked that other dream, covering a state champion.

Readers surely have their memories of Harrison County sports over the years. Here are some of mine:

Each postseason, hospitality tents/rooms equals food, which make sports writers throughout the state very happy. Best grub ever? Some time ago, South Central baseball hosted a sectional and the hospitality tent on the softball field has been unmatched since. There was steak. There was shrimp. Need I say more?

Accurate to say, I’ve been pretty good staying calm and cool at games. The lone time I really wanted to “boo?” The no-call at the Charlestown boys’ sectional in 2013. If you were there, you know the scene. To say Corydon Central fans were infuriated is an understatement. I still think about that one.

Don’t wanna play there award? The Eagles’ Nest has to be one of the toughest venues to walk away from with a win. The band. The heat. The noise. The purple. It’s everywhere. Definitely a fun place to cover a game on a Friday night.

Encouragement and inspiration award goes to a host of athletes. One of my favorite times of year are events featuring Unified athletes and the Challenger Ball games. It’s smiles all around. It didn’t stop there with inspirational people I’ve met. Katelyn Pavey and Landis Sims are two athletes and people I had a pleasure of sharing those stories.

Remarkable upset award could go in different places. When I started here, if you would have told me Corydon Central football would win a regional, many would say I was crazy. The Windell dive! And North Harrison football with an undefeated season? The Wetzel catch! Pick one program to win a state championship, no way you pick Lanesville baseball 12 years ago, right? Then there was the shocking softball upset when Lanesville defeated No.1 Borden.

Sectionals are nice, but the best state championship atmosphere many likely haven’t experienced: wrestling. The energy throughout Bankers Life Fieldhouse at the state finals seems never ending. All. Day. Long. A close runner-up is cross-country. It’s more like 1,000 spectators also run a 5k that day.

Best pre-game ever, not including hospitality rooms? That 2017 girls’ basketball regional at Charlestown. The players, the fans, everyone was dancing as the incredible North Harrison girls’ program marched through Vincennes Lincoln and eventually to a 3A state runner-up. What a run that group went on.

Really, I can’t go through all my memories in this space. There are far too many, including watching Timothy Wiseman battle Tiger Woods at the U.S. Open.

In reality, thank you for welcoming me to your community. Underneath the notepad, behind the lens, I’ve become a fan of Corydon Central, Lanesville, North Harrison and South Central. I’ll miss the razzing I get for wearing a Louisville jacket or a Cubs hat. Miss the reminders that I missed a game I should have been at. Miss being asked why I have a certain color shirt on inside a certain gymnasium. Miss the banter and conversation with ADs, coaches, athletes and fans off the court. Miss the asking if I have a scouting report on such and such. Miss the request to take a photo.

Add it all up and it’s been one heck of an experience. I won’t stop loving sports, and my 2-year-old daughter is already asking when she can go to another basketball game. I may show up here and there to catch some action. Don’t be a stranger; I still like popcorn. For my future, I’m stepping away from journalism to try a new adventure in the communications field but still plan to freelance with writing and photography.

Now I sign off and will certainly have a piece of Harrison County with me moving forward.