Celebrating Statehood
Kerry Zimmerman gives Karen Knotts a tour of the Zimmerman Glass Factory and tells her about the family business during a 2013 visit. 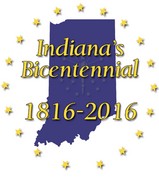 Corydon’s glass tradition started near the turn of the century in 1903 in Marion when a group of lamp chimney workers went on strike at the McBeth Evans Glass Co. Management and workers could not reach an agreement so the striking workers decided to take their skills elsewhere and form their own cooperative lamp chimney factory.
In 1904, they relocated in North Vernon, which was attractive because North Vernon was a railroad center and also boasted an abandoned glass factory nearby. The business incorporated as the Co-operative Enterprise Glass Co. Inc. with Thomas Finnerty filling the office of president for 19 years until 1923.
The Cooperative Enterprise Glass Co., with about 200 employees, operated the lamp chimney factory, using oil to heat the glass furnaces. They also employed young, local boys who learned to finish the lamp chimneys and then were apprenticed to learn to be gatherers.
A glass shop was made up of three men: the blower, who formed the lamp chimney; the gatherer, who gathered the glass from the furnace on the pipe; and the finisher, who held the chimney in the ‘Glory Hole’ to heat the top to proper temperature so it could be crimped with fashionable wavy edges.
The primary method of marketing the completed chimneys was through jobbers, notably Louisville-based Myers Bridges Co. and Peaslee-Gaulbert Corp. and Cuppes Co. of St. Louis.
Roscoe Atwood assumed the reins from Finnerty as cooperative president in 1923, serving until 1948.
In a remarkable streak of management continuity, the cooperative had only two presidents between 1904 and 1948.
Soon after Atwood’s presidency began, disaster struck. On March 17, 1925, as the factory furnaces were being ‘fired up’ after a shutdown, an oil tank exploded, sending the cooperative facilities into flames. The large, two-story glass factory building was completely destroyed.
The cooperative faced a formidable rebuilding task but, before the members had time to consider exactly what their course of action should be, they had entrepreneurial visitors from Southern Indiana. Known as the Young Business Men’s Club, the group from Corydon called on them with a relocation proposal.
Movers and shakers from Corydon who made the economic recruiting trip included T.J. Hudson from Keller Manufacturing Co., Charles Buchanan, representing the Louisville New Albany Corydon Railroad, Sam Riely from Old Capitol Bank & Trust, Earl R. Miller of the Corydon State Bank and T.J. Heaton of Railroaders Gas Co. In their sales pitch, the club members indicated they were actively searching for new factories to set up shop in Corydon.
Of course, the cooperative men immediately asked, ‘Where is Corydon?’
When they were informed that Corydon was in the southern part of the state and much closer to Louisville, where many of their customers were located, cooperative management warmed to the proposition. When the Corydon businessmen told them there was a seemingly inexhaustible supply of natural gas in the proposed area, that clinched the bargain, and the cooperative quickly agreed to the relocation plan.
The Young Business Men’s Club owned six acres along the creek on Valley Road (the road which currently leads to Tyson Foods), and they deeded three acres to the Co-operative Enterprise Glass Co. The factory, blacksmith shop and office were constructed under the supervision of Michael Herter.
The cooperative’s first lamp chimneys were produced on July 1, 1925, with the factory operating from 6 a.m. to 10 p.m. with 96 employees. The company prospered and, at the peak of production, shipped out 3-1/2 carloads of lamp chimneys each week.
During World War II, the United States government expanded markets as it shipped chimneys to other countries around the world. With the changes in lighting brought about by the Rural Electric Membership Corp., better known as REMC, which electrified rural America and eliminated the need for old coal oil lamps and chimneys, the factory closed its doors in 1948.
Today, the Harrison County glass legacy continues through the Zimmerman family.
The Zimmerman tradition of ownership began in 1942 when Victor Zimmerman, who had learned glassmaking from his father, Frederick, started Glass Handcrafters with two partners. Joe Zimmerman took over the business from his father, Victor, in the early 1960s.
The Zimmerman’s first glass factory building had to be replaced after the first one burned in an unexplained fire in 1983.
Today, Joe’s son, Kerry, along with Kerry’s son, Alex, continues the Zimmerman legacy at Zimmerman Art Glass located at 301 Valley Road NW in Corydon. The world-renowned glass factory is remodeling the vacated business at the corner of Chestnut and Mulberry streets with plans to relocate there later in the year. The remodeled facility will include a showroom and museum.
The business is open Tuesday through Saturday, and visitors are welcome to watch live demonstrations of the glass-making process. Completed creations, including paperweights, lamps, bowls, baskets, dishes and other works of art, are shipped all over the world.
Karen Schwartz, president of the Historical Society of Harrison County, serves on the legacy group of the Harrison County Committee for the Indiana Bicentennial. In preparation of Indiana’s bicentennial in 2016, she is providing a monthly column ‘ focusing on a person, place or event from Harrison County’s history ‘ that gives insight to our history. She said the columns should serve as an introduction and/or summary of a topic but are not intended to include all known facts and information. To suggest a topic, contact Schwartz at 812-736-2373 or 812-738-2828, by e-mail at [email protected] or by regular mail at 5850 Devil’s Elbow Road NW, Corydon, IN 47112.